I rather liked it.

There you go, I’ve said it; I did. I liked it. Imagine the 1980 Flash Gordon mixed with Dune and The Fifth Element and you pretty much get Jupiter Ascending. If that combo of movie influences intrigues you, you may very well find that you enjoy Jupiter Ascending too. Its Gordon’s rich, brash comic-strip colours, its Dune’s mind-boggling huge scope and far-future space opera and its Element’s cheeky European tongue-in-cheek humour. Put it all in blender. Throw in the crazy attempt to squeeze a Star Wars trilogy into one two-hour movie (as mad and headache-inducing as that sounds) and you get Jupiter Ascending. Its mad. It doesn’t work, and yet it does. Its daft. Its fun. Its preposterous. Its bloody stupid. Its got an interesting subtext/social commentary about the rich feeding on the poor (in the case of Jupiter, literally feeding on the poor). It has a heroine who does very little, and even less that is actually heroic. It is, yes, stupid beyond belief (have I said that already?). Well, it is. I should hate this movie. But… but…

But did I say its breathtakingly beautiful?

Well it is. It’s a space-opera fan’s wet dream. While no amount of eye-candy will ever substitute for plot or character or drama, there is something rather unrelentingly endearing about Jupiter Ascending. The Wachowskis and their team have created this huge epic movie with gigantic spaceships and bizarre aliens and gorgeous alien worlds and crazy costumes and… well, it has to be seen to be believed. Its as if all the pulp fantasies of Astounding and all those old sci-fi magazines burst into cinematic life. I know I should hate this movie, but its so crazy and daft and beautiful it melted this cynic’s heart, and I suspect it may be a guilty pleasure for many if they ever ignore the reviews and give it a chance, either at the cinema or on Blu-ray someday. I do not imagine it will win many over but… well, I’d much rather have this crazy joyous mess of a movie than Guardians of the Galaxy.

‘Art’ it isn’t. I’m not going to suggest that this is a cult film that will one day be reappraised as a classic. Its a film that features a character named Jupiter Jones as its heroine, and her love-interest is a hunky bloke gene-spliced with a wolf (she even says “I love dogs” to him during a romantic interlude). Its crazy, utterly bonkers. But that craziness is intriguing somehow. It even leaps off into Brazil territory;a wild frenetic trip into space-opera bureaucracy that actually features that films director in a cameo, yes, Terry Gilliam- yes, thats right, the ode to Brazil features Brazil’s director Terry Gilliam (I was loving the sequence and then saw Gilliam and thought, bloody hell, they’ve got Gilliam! The Wachowski’s ARE crazy!). Seriously, its just that kind of nuts.

No doubt this film is tanking miserably at the box-office, but it was always going to, wasn’t it? The writing was on the wall for this film when it was delayed from July last year until this month. Why anyone making this film actually thought it would find an audience and be a hit is beyond me. Its one of those films that you watch simply incredulous that it even got made. Not that I think it is terrible or any worse than many other so-called blockbusters. Other than Guardians, I’d certainly take this film over Transformers 4 or the last Hobbit film- the fact that those two films have each made over a billion dollars at the box office (well, I think the Hobbit film is a bit shy of the golden billion figure just yet) is certainly no judgement on the comparative artistic value of the films. Jupiter is fun. Jupiter is bonkers. Jupiter has to be seen to be believed. 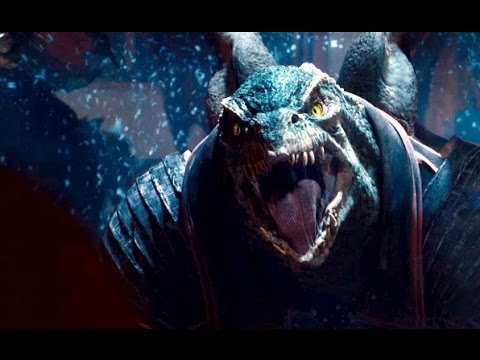 Can’t wait for the Blu-ray.

(Did I mention the dinosaurs? There’s these hulking walking talking biped dinosaurs…. they reminded me of the Kleggs from the Judge Dredd strip from 2000AD’s 1970s heyday.  Any film with badass talking Dinosaurs can’t be all bad in my book.)