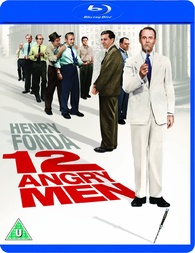 Ah, 12 Angry Men– a review here seems largely redundant- a sensational film; one of the very greats. As powerful and important now as it was when it was made, more than fifty years ago, and likely to be just as powerful when its a hundred years old.  One for the ages, as they say, only here in this case at least its very true. I’ve seen the film several times over the years (and now in HD on a fine Blu ray) and it rewards every time.

Filmed in stark black and white,  its ostensibly a courtroom drama but really its something else entirely- yes, its set almost wholly in a jury room as the twelve jurors debate the guilt of a young boy accused of murder , but its much more than that. Its a study of twelve characters, twelve Everymen, strangers to each other, each from wildly different lives and backgrounds. Its a study of how they behave, what they believe, how they interact with each other, and how personal prejudices affect their behaviour and attitude towards the case.

As they assemble in the juror room, referring to each other as Juror One, Juror Two etc, the faultless casting and tight screenplay give the viewer immediate insight. Its in how they move, their mannerisms, their speech, as if with the briefest of brush-strokes the film paints us a complex picture. The camera relentlessly fixes its eye (and therefore the viewers eye) in tightly framed close-ups of each of the 12 jurors. An initial count reveals that all but one of the jury believes the boy is guilty. The one holdout is Juror Eight (Henry Fonda in his usual all-American wholesome character that reminds me how much of a shock/master-stroke was his later casting as the villain in Once Upon A Time In The West); Juror Eight doesn’t believe the boy is necessarily innocent, just that he has his doubts that he is guilty. He isn’t sure, he felt the case for the defence was poor, and that he wants them all to discuss and review the facts once more.  What follows for the next near-ninety minutes is a riveting examination of the characters and how it affects over the course of their deliberations their final decision.

The cast is to die for- mostly unknowns at the time, with backgrounds in television, the actors would generally have great success in the years ahead- actors like Martin Balsam, John Fiedler, Lee J. Cobb, E.G. Marshall, Jack Klugman, and Jack Warden. If those names little to you, consider yourself slapped on the wrist.

12 Angry Men reminds me of Glengarry Glenn Ross; both films are studies of the human condition, and both are master classes of acting. Both are fine studies of their Americas, separated by the decades; Glengarry is a study of greed, of a cut-throat world where morals suffer under the weight of ambition and sales are gained at any cost – 12 Angry Men is a study of society and the justice system, where 12 strangers from widely different backgrounds bring all their beliefs and prejudices into play when in the jury room. The stories both films tell are almost incidental to the incredible character acting demonstrated in both. Its remarkable stuff. Every budding actor in drama school must surely have a copy of each of these films at hand. Maybe every budding screenplay writer should too though, for although the acting is incredible and at the fore, in both films the scripts are razor-sharp, brimming over with a sense of reality and truth. Magnificent films.