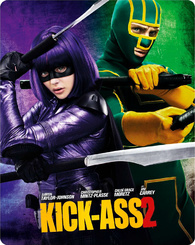 We have been swamped by super-hero movies lately. Marvel alone have flooded the market with all manner of super-hero movies with resultant sequels. People don’t need to read comic-books to get their fix any more- a trip to the summer cinema or DVD shop in the Autumn can sate any comic-book fan’s needs. Its no mistake that the continued success of the genre has coincided with ever-more elaborate and fanciful special effects; indeed, one has to wonder is the superhero genre furthering the prevalence and sophistication of cg effects work (God knows individual effects artist pension plans have likely been entirely financed by superhero films alone), or is the cg work (bigger, louder with each outing) itself maintaining the appeal and viability of the genre? I’m still amazed the bubble hasn’t burst yet. How long can it be before audiences grow tired of cities being levelled in cg-cartoons?

The Kick-Ass films (I have never read, and have no knowledge of, the comics/graphic novels the films are based on) have a lineage dating back to Frank Miller’s Dark Knight Returns and Alan Moore’s Watchmen, seminal works that transposed the traditional super-hero archetypes into ‘real-world’ scenarios, stories about ordinary (albeit, lets admit, rather crazy) people dressing up in odd costumes to fight real-life crimes.  Lets face it, Bruce Wayne is a complete nut-job, a mega-rich guy with a deep-seated guilt complex trying to justify/find retribution for the deaths of his parents. Some millionaires would spend lives dedicated to charity and solving societies ills through philanthropy and generosity, whereas he dressed as a bat and beat the shit out of criminals likely themselves victims of their broken society. Was Batman ever the cure or did he only perpetuate the problem?

Not that the Kick-Ass films look into it as deep as that. Kick-Ass, as the title implies, is more concerned with ultra-violence and knowing asides skewing comic-book traditions: the first film’s Big Daddy was an obvious Batman, but his Robin was a little girl that he knowingly took into deadly danger, and the titular Kick-Ass was a jerk, frankly. But the first film was certainly fun, with a fresh, albeit brutal slant on the genre. Sort of like how one might imagine a Tarantino superhero film would look. Or how Mad magazine would spoof a typical modern-day superhero movie.

Inevitably the second film, while offering more of the same, suffers from being, by definition, less ‘new’, losing the shock-factor of the first film. There’s also the feeling that its holding back it’s punches, a result from perhaps trying too hard to broaden its appeal towards the mainstream of the Marvel movies. This is understandable; Dredd was a great movie for fans of the comic but likely too intense for most mainstream audiences. Unfortunately this rather means that Kick-Ass 2 keeps few completely happy- its possibly more palatable than the first for Joe Public but that likely alienates some of the hardcore fans of the original (and the comic). I quite enjoyed Kick-Ass  2 for what it is, but there’s the feeling that it should have stuck to its guns (sic); it just feels a bit lightweight compared to the original, really. Frankly the central bad guy (the original Red Mist now retitled something unrepeatable here) has no sense of threat- in any superhero movie its often the villain who chews up the scenery and brings weight to the movie but here that’s sadly lacking to the detriment of the whole.

That said, it may have been entirely faithful to the comic so I can’t say if its the film’s fault or simply the source material. For all of its faults its still a fun ride and offers plenty of action. The story may not really ‘click’ the way the first did, and the central joke of the uber-violence may not be as funny as it was first time around, but its not bad at all and I’d like to see a third film to finish things off.

As with the first film, it may say ‘Kick-Ass’ on the title but it’s really Hit-Girls movie. Chloe Grace Moretz is as brilliant here as she was in the first, and I’d have preferred it to be just her story alone rather than be more concerned with Kick-Ass and his bunch of misfit heroes.  Moretz dominates every scene she is in and as she rides her bike into the sunset, I was left hoping that a third film goes on to follow her and leaves the other weirdo’s behind.  Just give her a decent villain next time.