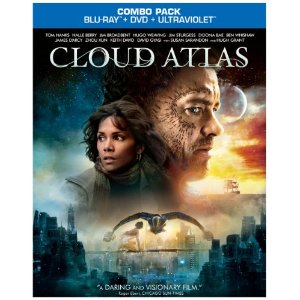 What a bold, mesmerising, thrilling, frustrating, baffling film this is. Its so odd, so unusual and brave and crazy, smart and foolish, its hard to believe it even got made considering how ‘safe’ and charmless so many films are nowadays. Most likely the most ambitious movie I will see this year- I’m in awe of the sheer audacity of it. As a character says during the movie, …while my extensive experience as an editor has led me to a disdain for flashbacks and flash-forwards and all such tricksy gimmicks, I believe that if you, dear reader, can extend your patience for just a moment… you will find there is a method to this tale of madness.

It is certainly a polarising movie; a friend of mine saw it and absolutely hated it, and continually maintains it being the worst film he has seen at the cinema this year (but then again, he hasn’t seen Star Trek into Darkness).  My friend Andy does seem to be voicing the more popular opinion of film fans though, as Cloud Atlas fared rather badly at the cinema and I doubt it will recoup its budget even after home video releases (and I’ll have to admit I didn’t see the film at the cinema myself- I had to wait for the American Blu-ray release a few months back).

Home video does hold some interesting possibilities though. There are some fans of Cloud Atlas who state that in twenty years time the film will be as highly thought of and  ‘re-discovered’, as Blade Runner eventually was (‘our generation’s Blade Runner‘ as some put it); I’m not so sure about that. I enjoyed Cloud Atlas but its no Blade Runner.  I will agree though that plastering Tom Hanks and Halle Berry on the poster art likely had people expecting the wrong kind of movie in just the same way that Blade Runner‘s poster art had cinemagoers expecting a Harrison Ford action-adventure back in 1982. I can imagine how the punters reacted when Tom Hanks actually turned up in several roles and in the main one spoke a frustrating pigeon-English that left viewers flustered and unable to understand what he was even saying. But that is the main thing both films share- just how do you encapsulate films like these into a poster? How do explain what kind of movies they are when they are so unusual? The Cloud Atlas Blu-ray cover makes it look like some kind of futuristic adventure starring Tom Hanks and Halle Berry when infact its actually an ensemble art-house movie with an obtuse plot spanning centuries. Its interesting that while the poster misses the mark the trailer really nailed it, but even then it had to be an extended trailer something like eight minutes long!

Watching at home does have advantages. Several times I would rewind the movie in order to catch exactly was being said in the far-future sequences (its very ‘honest/realistic’ but perhaps a bit too clever); and seeing the film a second time certainly irons out some of the plot and the connections across the centuries. I admit that while I enjoyed it on first viewing, it does become an even better movie a second time. But how many people will even give it that second chance? And that’s why its no Blade Runner and won’t share Blade Runners eventual reappraisal. I’d like to be proven wrong though. Certainly, watching it a second time I found myself becoming more emotionally involved and effected by the events of the last third. The film ‘worked’ better, and I really look forward to a third viewing.

You see, if you ‘get’ the film- if you don’t mind working at the plot and maybe rewinding some of the trickier dialogue (‘heresey!’ I can hear some cry at that) or switching on the subtitles (should you even have to press ‘rewind’ and ‘subtitles’ on your remote to ‘get’ a film though?), then the film is pretty damn good. The cast are marvellous, the direction (mostly) inspired, the music sublime. It is not perfect though- it has its flaws, but I’ll take those flaws if it means getting such a bold film as this. Indeed, when all is said and done, when we finally reach the end-of-year, I do think it will be one of my favourite films of this year.

So anyway, Cloud Atlas is at last released over here in the UK on DVD/Blu-ray next week, and I urge anyone brave enough to please give it a go. At the very least being your own projectionist gives you a better chance than cinemagoers had to unravel the genius from the, er,  madness.