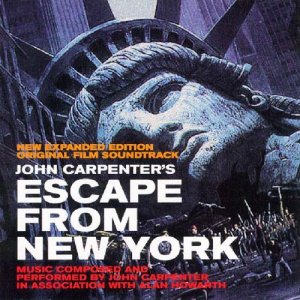 Escape From New York (Expanded edition).  I’ve just bought this expanded edition of John Carpenter’s seminal EFNY soundtrack- its not new, its been out for years, but I never got around to buying it until now. I’ve got an old edition from the mid-eighties up in the loft somewhere- it was a straight port from the original vinyl edition and originated from Germany of all places, so it had different artwork and the title ‘Die Klapper-Schlange‘ (what is that in German?). I think even the track titles were in German;  I guess all that stemmed from the compact disc being a ‘new’, limited-market format back then (yeah, I’m old enough to remember the days of vinyl and cassettes ruling the record stores and compact discs being in a corner somewhere like a niche item).

Here we are decades later and even compact disc is going the same way as vinyl and cassette,  its all downloads now. I don’t like downloads. I guess its a generation thing, but I still prefer having something tangible, a real object in my hand with a case, liner notes etc. and I’ll even pay extra for a CD when the thing is available as an mp3 for less. Behind the times, eh?

Before I bought that German CD, I remember borrowing the vinyl edition of EFNY from the town library during my college days, and recording it on cassette. It may sound dated now but the Carpenter score was so cool back in the day. Originally due to being forced into it (he couldn’t afford to pay someone to do it for him), Carpenter scored his own film soundtracks (Dark Star, Assault On Precinct 13, Halloween, The Fog) but by the time he got to Escape From New York, it wasn’t so much a budgetary constraint forcing him to do it, it became part of the identity of his films. The limited technology of synths back then give his scores a bare-bones, gritty, retro feel that is rather unique, and was at the time. The often cold, simple and direct synth scores mirrored the style of film-making that Carpenter was pioneering- basic, no-frills, shotgun film-making; nothing fancy, brutally direct. In these days of digital film-making its a wonder there aren’t more modern-day Carpenters shooting films like he did, as you’d think it would  be easier to get away with it on digital compared to the costly photo-chemical days; its an irony about digital that perplexes me.  Surely we should have more risky low-budget films and fewer huge blockbusters? Oh well. I think its fair to say Escape From New York is one of his better scores (although my personal fave is likely Prince Of Darkness from a few years later) and as entry point to Carpenter’s film-music this is the album to go with.

This expanded edition has the remaining cues that wouldn’t fit on the old vinyl version (twenty minutes per side, and that was your lot back in the day), alongside music not featured in the film (an abandoned Bank robbery prologue that was shot and scored but cut from the film, and an end-title piece that was dropped as it was deemed to break the mood of the film). A few dialogue snippets are thrown in to jazz things up and provoke memories of the film, in a similar fashion to Vangelis’ maligned 1994 Blade Runner album. It all results in a great listening experience, and hearing it again after so long it feels fresh and more impressive than ever.  Its got me reaching for my copies of the They Live, Big Trouble In Little China, Prince of Darkness soundtracks to continue this John Carpenter soundtrack listening experience. They really don’t make music like this anymore, just as they don’t make films like Carpenter did in his heyday (well I guess stuff like Dredd qualifies but look what box-office fate awaited that- makes me abandon all hope).

6 thoughts on “Listening to…”