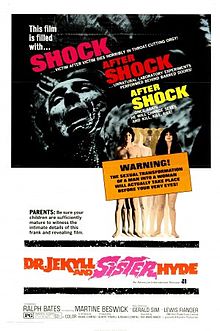 The Horror channel’s airing of old Hammer faves continues with this tongue-in-cheek, horror-come-sex-farce tale based on Robert Louis Stevenson’s short story The Strange Case of Dr Jekyll and Mr Hyde. Dating from the 1970s decline of the studio, Dr Jekyll and Sister Hyde is no doubt one of the lesser films that Hammer released but it certainly left its mark on me as a young man watching it on late-night tv many years ago. Hammer often offered a few twists when retelling famous old horror tales (updating Dracula brilliantly in 1958) and here it retold Robert Louis Stevenson’s story by Jekyll transforming into a beautiful woman instead of the usual monster. The scene when Jekyll is first transformed into his female alter-ego, Sister Hyde (deliciously played with mischievous fun by Martine Beswick) and examines his new breasts in the full-length mirror certainly got my attention back then, and I’ve never forgotten it since. The weird thing is, beyond the obvious titillation (sic) the scene provides males of the audience, its also an inevitable ‘true’ moment- what else is a guy going to do when he first finds himself in the body of a beautiful woman? It reminds me of similar moments in Kathryn Bigelow’s Strange Days, where one of the popular tapes played by men features the recording of a young woman bathing in the shower.

The casting is excellent- the facial bone-structure of  Martine Beswick looks remarkably similar to that of Ralph Bates, whose obsessed,  socially inept Dr. Jekyll is a perfect balance against the more confident and predatory Sister Hyde. The perhaps unnecessary elements of sex-farce arise from Jekyll’s upstairs neighbours, a brother and sister, one of whom is in love with Jekyll while the brother naturally has the hots for Hyde, with the inevitable timing foul-ups and confusions that follow.  There is plenty of material here for comments on gender, something a more sophisticated film might really have gotten it’s teeth into, but of course Hammer was just a studio turning out rather simple horror pics.  There are the barest hints of homosexuality, transvestitism and gender confusion (Jekyll momentarily attracted to the brother for instance). It’s telling though that Jekyll’s friend Professor Robertson, suspicious of his old colleague’s medical research and the rising numbers of murders in the area, is undone by his own sexual urges when he is seduced by Hyde.

One thing I was surprised about watching it again after so many years (its funny the things you forget)- I always thought that Hyde represented Jekyll’s evil, darker urges, but in the film once his supply of cadavers dries up, Jekyll himself is out there wandering night-time Whitechapel murdering women himself.  By the time his transformations begin, he’s something of a Jack the Ripper already (indeed its very impressive how cleverly Hammer ties together the Jekyll and Hyde story, the Jack the Ripper murder case and the infamous grave robbers Burke and Hare). Jekyll is hardly the innocent at all which rather overturned my expectations of how the plot would play out (indeed, the audience never has much sympathy for Jekyll at all and he deserves his inevitable undoing).  While Hyde herself soon takes the opportunity to use her own gender as a disguise for committing further murders, the chief difference between the two is one of social adeptness, confidence and character.  Jekyll is attracted to Susan, his upstairs neighbour who is clearly smitten by him, but is rather inept and awkward at pursuing any romance, whereas Hyde soon has Susan’s brother on the couch! Perhaps there are suggestions of sexual politics and women’s liberation there. In more sophisticated times or under the control of a more ambitious studio, this could have been a very thought-provoking and impressive horror tale with all sorts of messy subtexts to delve into.