Twins Of Evil is the third of a series of films loosely inspired by the vampire novella ‘Carmilla’ by J.Sheridan LeFanu. It’s your typical Hammer ‘heaving breasts’ movie, demonstrative of the continuing falling fortunes  for the studio as it tried to maintain relevance in changing times by injecting more sex into its films. It is indeed interesting to see how relaxing censorship rules and public tastes reflected on Hammer films from the classics Curse of Frankenstein and Dracula to later fodder such as this.

Twins of Evil‘s titular characters were played by Madeleine and Mary Collinson, who had earlier received the distinction of being Playboys first centerfold twins. Hardly averse from baring their flesh, the girls would take every opportunity to lean forward displaying their proud bosoms to the movie audience. That’s not to denigrate the quality of their performances; each of them do quite well in the film, but its nevertheless clear they knew what they were being hired for and its clear they relished the opportunity to have fun with it. 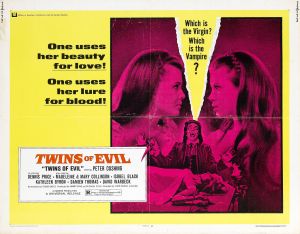 But while on the surface its certainly a dumb, lesser-Hammer movie, dating from the era of its remorseless decline,  it does have much going for it. The film looks impressive, indeed remarkably atmospheric with some rich photography and framing by Dick Bush- some shots are quite arresting, moodily and exquisitely lit. Even on a poor tv transmission quality image on the Horror channel, some shots looked quite amazing.

Twins of Evil also has a story more layered and interesting than you might expect. Certainly there’s plenty of subtext here for ‘readings’ of the film beyond its generally-accepted reputation for being a Hammer Cleavage Potboiler. Somewhere in Eastern Europe, a group of puritan zealots called ‘The Brotherhood’, led by the fanatical Gustav Weil (Peter Cushing) terrorises the area by seizing any young woman that takes their fancy and promptly burning her for witchcraft. The men evidently equate sexuality with the Devil, and anyone who questions them is believed to be in league with Satan.  Into Gustav’s home arrive two orphaned nieces, Frieda and Maria Gellhorn who Gustav greets with  stern disapproval- they are young, wanton spirits,  provocatively dressed and to him clearly corrupted by the  ‘outside’ world. 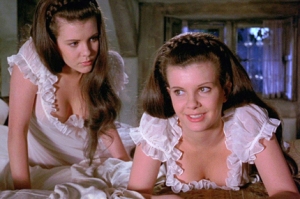 As it turns out, Gustav isn’t far wrong- Maria is an innocent virginal ‘good’ girl, but Frieda is clearly all too willing to be corrupted by any man game enough- and fortunately there is just such a guy up in the Castle yonder.

Local aristocrat Count Karnstein (Damien Thomas), who lives in a foreboding Castle overlooking the village, is a satanic acolyte looking for darker and darker thrills as he despoils local girls,  finally culminating in a human sacrifice, which summons his evil ancestor Mircalla from the dead. Karnstein cements the loss of his soul to Satan by bedding the wraith, who in return grants him the powers of the  undead by vampirizing him. The Count intends to continue the Devil’s work with gusto, turning his attention to seducing  Frieda. Excited by the Count’s attention, this ‘bad’ twin willingly becomes his vampire bride. Sex again equals death. Or, as it is here, undeath.

It’s inevitable that the best thing about the film i 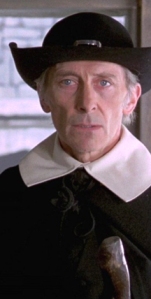 s the magnificent performance of Peter Cushing as the twisted puritan Gustav. But I’m likely biased, as I’d pay to watch a film of Cushing playing Scrabble, I think he was that good an actor. Regards this film in particular though, I’ve always thought that Cushing was the perfect actor to play Bob Howard’s hero Solomon Kane,  and never has that been more clearly evident than in this movie- its as if Cushing is channelling the icy coldness of Howard’s Kane here, particularly when he becomes conflicted and doubts his actions.   Alas, if only the world had been different, that Hammer might have shot a Solomon Kane movie back in the mid-sixties (of course, I doubt anyone at Hammer had even heard of the Texan’s fantasy series back then). Cushing is note-perfect here, his performance as usual very complex yet looking effortless. As an actor he deserved films leagues beyond the quality of this one.  One further note- I read with interest that this film was the first part he took following the death of his beloved wife Helen, the loss of whom is well-known to have devastated the actor. How much is that grief and loss in those agonised eyes and haunted character?

There are some genuinely shocking moments in this movie, particularly one where Gustav leaps upon his evil vampire niece and decapitates her without warning as she attempts to flee the castle at film’s end. It’s a reminder of how good Hammer could be when suddenly shifting gears into moments of savage horror.  Of course its restrained compared to all the gore and graphic detail horror films have now, but the power of it is how sudden, untelegraphed it is, how it is suddenly cut (sic) into the film. Gustav seems to come out of nowhere like a vicious force of nature. And of course, he’s the nominal ‘good-guy’ even though he has burnt several innocent girls at the stake.

Not that the film is anything near perfect- despite its finer moments, much of it is unintentionally  hilarious, reminding me somehow of stuff like Lifeforce as the horror slips into self-parody and comedy. Gustav and his band of merry zealots ride around all night to  bizarre Western Music From Some Other Movie as they round up poor girls for burning. Maria’s love-interest is a music teacher who writes as agonisedly bad a lovesong as you will ever hear. Near the film’s end when Karnstein’s black mute servant spots the villagers about to attack the castle,  he attempts to warn his master through some strange game of  ‘Give Us A Clue’ that has to be seen to be believed.

But on the whole this is a pretty good Hammer movie- certainly better than I had expected.  As I have noted, I watched this on tv on the Horror Channel, so can only imagine how good it would be to see it on blu-ray. Unfortunately the only HD release I am aware of is a Region A-locked edition in the US. Perhaps someone will have the wisdom to release it over here someday. It deserves to be.