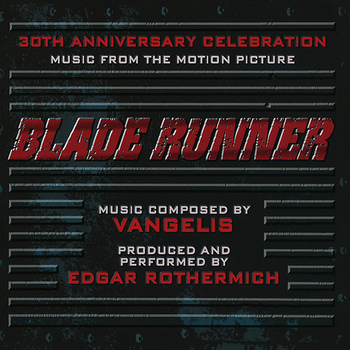 So this BSX release turned up.  The Vangelis score for Blade Runner recreated by German film composer/producer Edgar Rothermich, I think there’s two things that immediately spring to mind having heard it- first that it sounds very good (not a perfect match for Vangelis but not too divergent from it, easily the best re-recording of any Blade Runner music to date, and benefiting from wonderfully clear recording quality) and secondly the question, well, “why insist on just copying the bootleg rather than reproduce the whole score?”.

The Blade Runner score and its long road to official release, and then the lacklustre quality of those releases, is a long story that I won’t go into here (I’ve gone into it before on this blog). But suffice to say its been a sad fact that the best edition of the score on disc is any one of the many bootlegs that have done the rounds for the past twenty years or more, albeit their sound quality is generally inferior to that of the official releases. The producers of this ’30th Anniversary Celebration’ seem to have decided that they should re-record the score and in doing so attempt to recreate the content of the initial bootlegs. I mean, this things content is pretty much identical.

So we wind up with a disc that is, incredibly, as irritating as the lacklustre ‘official’ releases that precipitated its creation. Yes, its nice to have the music in high fidelity without the edits and remixes and dialogues that plagued the official albums. But its irritating that recreating the music missing from the official releases hasn’t been attempted,while the bootlegs (inferior sound quality aside) produce the score recreated here minus the edits/remixes/dialogues anyway. Why slavishly reproduce the ten-minute Blade Runner Blues track when only a few minutes are in the film, or re-record One More Kiss Dear (source music way back in the background for all of twenty seconds in the film) rather than re-create I Am The Business or the Taffy Lewis Bar music, cues that every BR nut truly craves?

What I’m getting at is that this BSX release sadly doesn’t isolate itself enough from the official releases or the bootlegs with its own unique identity- this is particularly frustrating as much of it is just so damned good. A bolder, 2-disc edition with all the stuff from the film missing in all previous editions would have been nigh on perfect and indispensable. I’ve asked the producer of the album on one of the film music forums if an expanded or additional release might be one day on the cards but he didn’t bother with a reply so sadly it looks unlikely.

Still, all that being said, anyone who cares for the Blade Runner score should really race to pick this up. The CD edition is limited to 2000 copies but its also available on itunes so should be easy enough to get hold of. Rothermich really created something quite special here, and is to be applauded. I only wish he and the producers had been a tad mote ambitious.

Oh well, over to you, Vangelis. Time you had another attempt at the definitive Blade Runner?

One thought on “Replicant Anniversary- Blade Runner by Edgar Rothermich”