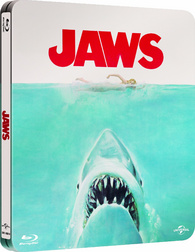 o I finally got around to watching my Jaws Blu-ray the other night (ain’t that steelbook a beauty?).  It was delayed by my wife’s ongoing love of Tennis with the US Open dominating the television for the past few weeks; must say Andy Murray finally winning a Grand Slam was the kind of tv event you never forget. Exhausting, terrifying, exciting, ecstatic.

This is the second time I’ve seen Jaws this year, the first being at the cinema during its limited re-release during the summer. Here’s something to boggle everyone- I saw it with my mate Andy who actually fell asleep early on (I had to nudge him awake when the two guys go fishing with a slab of meat on the pier); can’t say many patrons fell asleep during that movie before, eh? The Blu-ray image is pretty astonishing, actually putting the cinema to shame, although I must confess the sense of mass the shark had on the big screen was inevitably lessened on the tv. Wonderful film though; one of those genuine timeless classics that rewards every viewing. To have it in such a fine HD edition is wonderful and I’ll return to it often.  And the many extras are a veritable bundle of joy, should I ever get the time to watch them.

On the subject of classic movies, many of you may have noted the growing anxiety on forums regarding the quality of Universal’s Hitchcock Blu-ray collection due next month. One of the guys who used to work at MOC has got hold of checkdiscs or screeners and has been voicing rather alarming observations. Picture quality varies and the titles/credits for Frenzy have been re-done, in an ill-chosen font complete with spelling mistakes. Well, the US and German releases have been pulled, and I can only hope that the UK version follows suit. I’d sooner wait another month or two for a ‘proper’ release than something shoddy and ill-judged, particularly when some great films are involved (Vertigo is one of my very favourite films and the main reason I’ve pre-ordered the set). It’s crazy how many Blu-ray releases get blighted by shoddy masters, incorrect aspect ratios, missing extras…

Yeah, missing extras- I’m looking at you, Mickey Mouse. Yes the fine folks at Disney have short-changed UK buyers of Avengers Assemble by omitting the Joss Whedon commentary track. On the one hand I hardly care; I used to love commentary tracks but these days I struggle enough actually watching the Blu-rays I’ve bought without going through commentaries. There’s just never enough time.  On the other hand though, the track exists on the US version and its omission is likely a cynical cost-cutting measure or an even more cynical ploy with an eye to a special edition version later on. Thank goodness Disney aren’t involved in the Prometheus release (its weird though, quality-wise the Avengers movie likely deserved a features-rich edition more than Prometheus did). As for the UK version of Avengers Assemble being censored… well many folks have gotten very angry but hell, its a comic book movie. Its hardly going to ruin anyone’s enjoyment is it? I  dare say most first-time viewers won’t even notice.